It’s been a fairly eventful few days in the typically fairly uneventful world of commuting. I was on the 5:46 out of Gotham Tuesday eve, an extraordinarily packed train making the return to commuting after a 12 day break even more onerous than it should’ve been.

So jammed was it that one could not really even stand comfortably in the vestibule. I stood in the aisle, with my back to a door leading into another car, hovering over people in the last two rows of the car.

It was a pain in the ass spot, especially with a series of people coming through the door at my back in search of a place to stand.

But the vantage point did provide me with one chuckle; when one of the guys seated in the last row took his wallet out to display his ticket, I noticed he had the classic Jules from Pulp Fiction “Bad Motherfucker” wallet–you know, the one that Jules tells Tim Roth’s limey stickup artist to extricate from the schwag bag in the diner near the end (Or is it the beginning? They’re wearing shorts?!? Is Vincent Vega still alive?) of the movie. 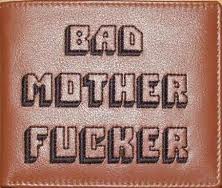 “The one that says Bad Motherfucker,” growls Jules and, to the delight of movie-goers everywhere, it indeed does.

When the Bad Motherfucker seated in the rear row got up at White Plains, I could tell he was quite large–maybe 220 pounds worth of mofo, though his degree of badness was not readily quantifiable.

Then, yesterday, I hoofed it from GCT down Park Avenue South to work. An Asian woman flagged me around 30th and Park, and waved a sheet of paper under my nose. She was lost. Her English was limited. Her gloved finger pointed to her destination on the paper: Park Place and West Broadway. Park Place, not Park Avenue.

I grimaced and gestured broadly in the direction of the southwest, no real clue as to how to get her to Tribeca, other than take the 6 to City Hall and at least get below Canal, where she could ask someone with a better knowledge of the island’s less traveled precincts.

Finally, yesterday evening, a late phone interview had me leaving the office at 5:17 with an eye on the 5:27–a full 14 1/2 blocks from Grand Central.

So I sprinted, which was one way to beat the tundra temps, and caught most every light. By 39th I knew I had the 5:27 in the bag. By Pershing Square, I even downshifted to brisk walking.

I entered the GCT doors at 42nd, and approached the second set of doors leading into Vanderbilt Hall. A grim faced woman of about 50 was making her way out the doors. She clutched a bag to her chest, and actually used it to ram the guy in front of me as he made his way through the door she was hoping to exit through.

I guess I was still in hustle mode…I don’t guess, I know I was…and instinctively zipped through the door behind the guy she’d rammed.

Well, she rammed me with a lot more vigor than she did him.

“FUCKING ASSHOLE!” she yelled, each syllable climbing up a step in volume and pitch, the profanity bouncing around the Vanderbilt Hall echo chamber. “WATCH WHERE THE FUCK YOU’RE GOING!”

In fact, I’d been carefully watching where I was going. It was more my judgement regarding attempting to squeeze in before she came out that she took issue with. I should’ve let her go. She should’ve handled my refusal to do so with a little more aplomb–I mean, F-bombs flying around hallowed Vanderbilt Hall? C’mon! Save the bad behavior for Penn Station.

Rendered momentarily sheepish from the encounter, I continued toward the concourse. A half dozen commuters looked at each other and shrugged.

“That was unnecessarily aggresive,” said a guy.

It raises an interesting issue though. When it comes to subways, any idiot knows that you let the people out of the doors before you enter.

But when it comes to entering/exiting a train station, the right of way flips. You defer to the person entering the station, as that person probably has 30 seconds to catch his or her train, and you presumably have a little wiggle room on your watch, having just exited a train.

It’s common sense, but it’s also tricky to switch from one mode to the other in a matter of minutes.

I was still slightly shaken, and out of breath, as the conductor came around for tickets.

I pulled my wallet out. It didn’t say “Bad Motherfucker” and I didn’t feel like one either.