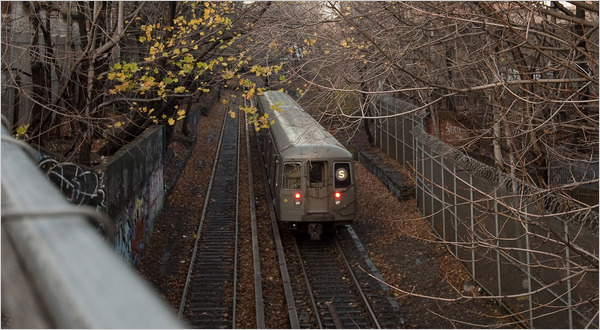 Outer-borough folks are learning what Metro-North riders have long known: Fallen leaves can severely foul up your commute.

The MTA has posted signs on subway lines that go outside, reports the New York Times, warning riders to expect leaf-fueled delays.

Subway riders who thought they had come across every reason for train delays — station fires, flooded tracks and sick passengers — have been presented with a new one: falling leaves.

Transit officials have put up about 500 signs along three subway lines in recent weeks warning that fallen foliage, “crushed by moving trains,” has been leaving a “slippery residue” that “may affect the train’s ability to start and stop.” Riders of the B and Q lines, which have several open-air stops in Brooklyn, and the Franklin Avenue shuttle in Brooklyn, which is completely exposed, were told to “allow for additional travel time.”

New Yorkers are not taking the news well.

“Because of leaves?” one rider, Sylis Gordon, asked incredulously on Wednesday as she waited for the Q train at the Parkside Avenue station. “That’s new.” She looked around her, noticing garbage on the tracks, but said, “There aren’t that many leaves.”

This entry was posted in Slippery Rail, Stuck on Tracks, Subway, Subway Accidents. Bookmark the permalink.