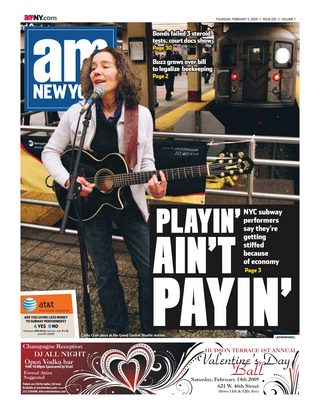 Subway musicians, known as buskers, are feeling the pinch from increasingly miserly passers-by, reports AM NY. If people are having difficulty keeping their jobs and paying their rent, they’re not about to kick a fiver over to a subterranean music man.

Or even a dollar bill, it appears.

“No bills. They put their little pennies quietly so you don’t hear the cheapness sound,” Lee said.

One musician that hasn’t felt the pinch–at least not that kind of pinch–is Times Square’s own Naked Cowboy, who’s still raking in $150 an hour. “I’m recession-proof,” Mr. Fruit of the Loom tells AM NY.

One busker who seems like she’s in for a good day today is Connecticut native Cathy Grier, who strums in the Grand Central Shuttle station. She’s pictured on the cover if AM NY, and also has her name, number and Website there for all commuters to see.

Maybe we’ll check in with her later and see what sort of feedback, so to speak, she’s gotten today from the cover story.

UPDATE: We got a nice note from Ms. Grier a few moments ago about the reaction she’s gotten from the cover story.

When the photographer came by and took pictures of course I never imagined a cover!!!  Being newly connected with facebook and myspace, I’ve posted a link to the cover.  So far I’ve had a few funny emails from friends who casually grabbed the paper as they do every day and not until sitting down in the train did it register that I was on the cover.

I was also scheduled to perform today and so I grabbed a pile of papers and put them on the floor by my bag as I played.  Many people picked them up and smiled after realizing.  A few walked right up to me with the paper in their hands pointing wondering if it was me.  Great NY moments! I’ve had calls from friends wondering if I had seen it, and a few calls from people I don’t know wanting to connect.

This entry was posted in Subway Musicians and tagged Cathy Grier. Bookmark the permalink.