The Limping Conductor and the LIRR Disability Scam

I was on the 6:33 heading toward Hummerville last night. Our ticket-taker had the typical Metro-North conductor’s Irish-by-way-of-Brooklyn mug. He also had a pronounced limp–the sort of lurching gait associated with some sort of fairly serious ailment. I don’t know exactly what the ailment is–polio, perhaps?–but you see someone walking in this manner–one knee pointing dramatically toward the other–in the city just about every day.

Anyway, I don’t mean to single this guy out for his handicap. But amidst all the stories about LIRR employees cashing in on lucrative, and often completely bogus, disability claims (not that “middle-class moronism” isn’t a legit ailment), here’s a guy whose clearly not functioning at 100%, but is working nonetheless–on his feet the whole shift, lugging those pain-in-the-ass doors open.

I don’t want to beat up on the LIRR either. I don’t doubt the vast majority of its employees show up to work when they’re supposed to, fight through aches and pains, and certainly work on the major holidays–something I’ve thankfully never had to do. Surely many LIRR employees are collecting disability for completely legitimate injuries.

I’ve gotten a fair amount of comments on the LIRR scandal since it broke in September, I’m guessing the majority of them from LIRR employees. It’s worth noting that most of them continue to defend the widespread practice of filing bogus disability claims, even after everyone from the governor to the attorney general to LIRR president Helena Williams said the practice was essentially indefensible, and one DC railroad expert compared the LIRR’s reported disability rate to that of a gulag’s.

LIKE ANY ONE OF YOU WOULDNT TAKE AN EXTRA DAYS PAY FOR A CONTRACT NEGOTIATION VIOLATION. oH NO THANKS BOSS i’LL JUST TAKE THE 1 DAYS PAY SO i CAN BE A NICE GUY. SOUNDS LIKE SOUR GRAPES TO ME. JEALOUSY IS A STRONG EMOTION. 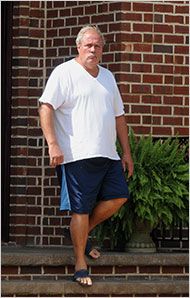 As the RRB IG (Railroad Board Inspector General) said, “It’s the law.” Applying for what is yours is not fraud, plain and simple.

Maybe you should try to get job there.

All who are complaining are just jealous that THEY don’t have those work rules, or the pay the LIRR workers do.

You get the picture. Unless I’m missing something, it sounds like, say, a bank ATM that was known to give out an extra twenty every time you visited, until the bank got wise and fixed it. After that, the people who used to get the free twentys were furious at the bank for fixing the ATM, and at the citizen who told the bank the ATM was busted.

Either way, I salute the Metro-North guy limping his way along on the 6:33 yesterday.

2 Responses to The Limping Conductor and the LIRR Disability Scam